A new form of tourism is sparking up in Oregon, and Pedal Bike Tours is leading the way – marijuana tours.

With recreational marijuana now legal in the state, Pedal Bike Tours is giving guests the chance to pull back the curtain on Oregon’s thriving marijuana industry with the launch of the state’s first cannabis-centered tour, the Portland Pot Tour.

Did you know hemp was one of the Willamette Valley’s first commercial crops? The Portland Pot Tour covers how Oregon’s fortunes have long been tied to the cannabis plant, bringing us up to legalization today. So in addition to the fascinating history, riders on the tour will learn the current laws for purchasing and consuming cannabis products, as well as get direct access to some of the finest pot available – and we’ll do it all by bike!

“People are curious about legal weed, and we’re excited to show them what’s happening,” says Pedal Bike Tours owner Todd Roll. “Who knows if this will be the state’s newest tourism draw, but either way, this ride will be pure fun.”

The relaxed 9-mile ride takes riders to some favorite dispensaries, like Canabliss and Gras, as well as legendary head shops like Third Eye Shoppe and Mellow Mood. Guests can browse and shop for the finest locally-grown and organic strains, hand-blown art glass and carved wooden pipes. The tour also includes delicious “pairings” with a couple munchy stops, including ice cream (yes: vegan options are available). A stop at Canabliss dispensary in SE Portland.

Prices include a bike, helmet, guided tour, food and a joint of local marijuana at the end of the tour ($69). Riders will not consume marijuana on the tour itself, but are welcome to purchase products for later.

We hope you can join us for this one-of-a-kind bike tour! If you love art and bikes, you’ll have a blast on one of our monthly guided bike rides to the art galleries of Portland’s Pearl District and the SE neighborhoods.  On the first Thursday and Friday of the month the Pearl and SE galleries stay open late and offer free food and drink.  Not to be outdone, we’re providing bikes and helmets for free on the ride.  So stop by our shop and come ride with us!  We will be leaving at 6pm and returning at 9pm. Check out our calendar for specific dates. 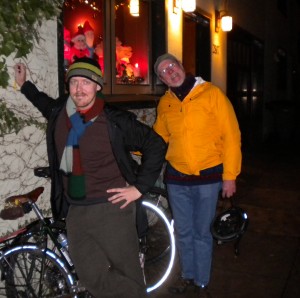 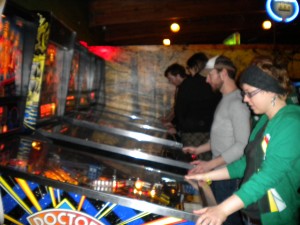 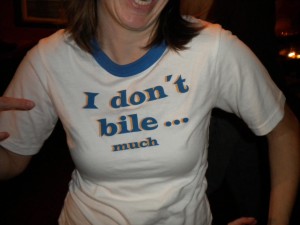 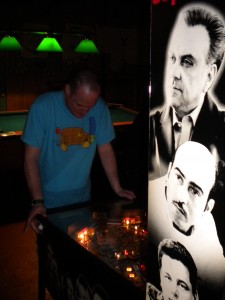 It sure is. Bendians (Bendites? Benders? Bendies? Bendos?) People from Bend, Oregon have one more thing to brag about besides skiing, rock climbing, Deschutes brewery, exquisite views of the cascade peaks, high mountain lakes, a lot more sun and a lot less rain than Portland- a great bike path network. We went over for the weekend and the weather was cool, crisp and fragrant with the spicy smell of woodsmoke. Meanwhile on the west side of the mountains the rain fell in dense sheets.

On previous trips I had noted the multitudes of mountain bikes and road bikes alike, all gleefully riding on magnificent paths often separated from the road by a lushly landscaped median. This trip we brought our own city bikes, intent on experiencing the paths for ourselves.

I’m happy, very happy to report we hardly had to ride on a bike pathless or laneless road the entire time. Even the main road right in front of our hotel, which was a mile outside of downtown in the big box store and mini-mall zone had a bike lane. The desk attendant hesitated only a moment when asked how to ride up the Deschutes river, (which I knew you could do at some point for several miles). Although her directions didn’t work out, we still had a lovely time getting lost, and she got points for not staring at us for asking what is, in most small towns in America, a flabbergastingly stupid thing, biking being strictly for children and those too poor or witless to buy a car.

Even in Portland, it’s not uncommon for a fat, luxurious bike lane to suddenly disappear, casting the hapless cyclist into the teeth of his deadly steel neighbors. Naturally it was the same in Bend, but less so than Portland which is one of only three platinum level bicycle friendly communities in the country! Like Portland, bike lanes ended without warning, but invariably once we turned the corner, hurray, there’s another bike lane!

Bend is full of traffic circles. Rich, retired Californian emigres plus tiny cowboy town equals instantaneous and massive town planning, emulating Europe on the scale of the reconstruction of Dresden after WWII. The result is a well thought out master planned town complete with a mall built around an old lumber mill and a river famous for its fly-fishing and world-class rapids meandering through downtown.

City planners didn’t forget bicycles when they put in these alternatives to intersections. As the bike lane approaches the traffic circle, it merges onto the sidewalk and the cyclist proceeds around the circle until choosing their direction, whereupon the path reappears. This kind of thought and, more importantly, expense is awfully impressive and almost unheard of. Combine this infrastructure with the restaurants, parks and brewpubs in town and great riding outside of town and you have bicycle nirvana. Good for you Bend!