Look who took a tour with us, the NBAs top star, LeBron James. We were out at the Nike Campus doing a special tour and the big man showed up to ride along with us. Come take a tour of Downtown Portland next time LeBron! 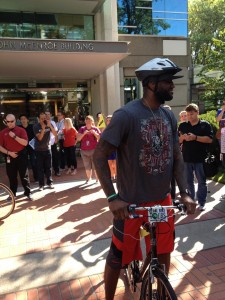 “This is Sir Francis Bacon,” said Jamie Dunn, the owner of the Gilt Club, the restaurant in Portland’s Old Town neighborhood where the scene was filmed in September. “The pork head mortadella came right out of this skull.”

“I love this show because this is how real born Portlanders look at all of you that moved here since 1998,” one person wrote in a comments forum on The Oregonian Web site.

Did you move here since 1998?  What do you think of Portlandia? 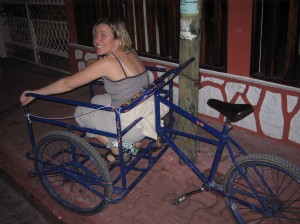 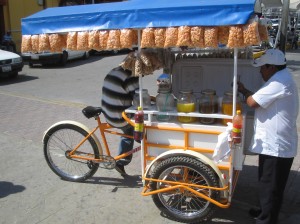 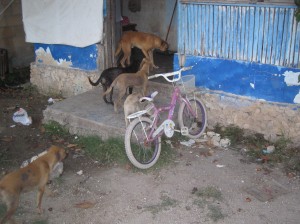 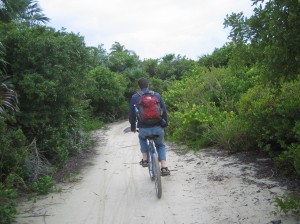 I rode into downtown today in the early morning fog. It was pretty cold, with the wind I stirred up as I pedaled downhill trying to cut through my clothes. Good morning for a heavy coat, scarf and long johns. The fog hung in the air like gray silt, translucent yet giving the same city as yesterday a new dimension. Riding into the fog felt like riding into a wall of blankets, but which gave no resistance as I battered it. On my cheeks was that same chilly sting of cold air, so bracing and energizing in the winter. As I passed over the Broadway bridge the reflection of the grain merchants building in the river was just obscured enough to look like a phantom level under the water. The sky above was the slightest tint of blue in the slowly dawning light, presaging another brilliantly sunny day.

By the time I had come out of my appointment in a windowless room, the sun was up, the fog was gone. But I remembered my ride and cherished the fog all the more for its fragile nature.

Going by car wouldn’t have been the same.

It’s a short article in the “Technology” section but it highly praises Portland’s bicycle infrastructure and how tolerant people are towards bicyclists here. The article cites our 171 miles of bike lanes, bike boxes (which allows bikes to be visible to cars at stop lights) and bike-only traffic signals.

A bar graph on the side shows the increase in bikes being put on bus racks in various US cities, with Houston increasing 235%!

The article concludes other cities could become as bike friendly as Portland simply by repainting street to include bike lanes. As interior decorators say, paint is cheap! It’s a little more complicated than that, many bicyclists in Portland prefer to ride on low traffic streets. This is an even cheaper solution, since it costs nothing to simply choose to ride on quiet streets with few cars. However, it’s Portland’s conscious effort to promote bicycling as an alternative to cars and commitment to improving bikes’ access to streets that has given so many people the confidence to ride around the city.

And every little bit of biking counts! Maybe you can’t ride the whole way to work, or want to get out on a bike while you’re traveling. When people see others riding and smiling it’s likely to spread, and that can also translate into more infrastructure, both for the benefit of tourists and locals. If you’re thinking of taking your bike along for your next adventure, or partial commute to work, check out this article about the 9 Best Car Bike Racks.