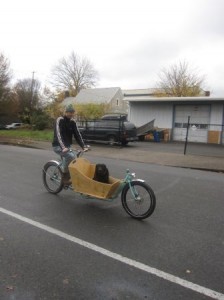 Holly is unimpressed with being treated as cargo

So I’m walking down the sidewalk when I sense a presence behind me. I turn around and there, like the mythic Yeti, is an apparition much heard of but seldom seen, it’s Phil from Metrofiets riding one of his handbuilt in Portland cargo bikes.

Phil is actually coming to the shop to show us what is only the third of their new creations. You can certainly understand why there’s only three, the thing is almost 10 feet long and features a wooden box mounted in the middle, big enough to hold almost 2 adults, or 2 kegs. Phil says it will hold 200 pounds while still being easy to maneuver and up to 600 pounds maximum. He let me take it for a spin and it did take a moment to get the balance down (the key is to look where you’re going, not at the box!)

Ever since Clever Cycles brought the dutch cargo bike Bakfiets to Portland a couple of years ago, interest in these utilitarian bicycles has been growing. Over the last six months news of new companies and products has been springing up. The Xtracycle is a bolt on rear wheel which creates basically a long bicycle with a long rear rack. It’s been around for a while, but now there’s the Yuba Mundo, based on the same concept. Surly has also come out with their own version called the Big Dummy.

Cargo bikes have a bin mounted somewhere allowing you to put things in without securing them down like on a rack. In addition to Bakfiets and Metrofiets, which have the box mounted in front of the rider, a company called Madsen just began building their own version. Madsen’s bike has the box mounted behind the rider with a well in the middle for the rear wheel.

In Eugene, Oregon, the Center for Appropriate Transport has been making their own cargo bike for years. More recently, another Eugene company, CETMA is about to launch their own version. And last but not least out of Europe is the Long John, possibly the oldest of the cargo bikes.

The point is, while not new, cargo bikes are becoming hot in the US and it will be interesting to see where the interest goes. With a 200 pound cargo capacity they are excellent for much more than just a quick trip to the grocery store. People here in Portland are even using them to move with. Their growing popularity will allow more people to get out of their cars more often and further reduce our dependence on cars, which as you know, I think is great!