Our reward for this spot?  A lush green place to live and just enough rain to enjoy a fresh, clean storm while biking around town, sitting over a hot latte with Cellar Door roast in a cafe or curled up on the sofa.

It turns out Mobile, Alabama takes first prize with almost twice as much rain as Portland (66.9″!). 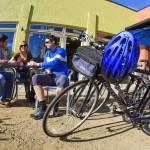 Hats off to my lady, the lovely Lota the commuter.

Yesterday morning the wind was howling, the rain driving and yet despite my repeated offers to drive her to work, she persevered and rode her bike to work. I sent her an encouraging note to find once she had gotten to the office, changed into dry clothes and finally logged into the computer. Here’s what she wrote back:

“I was definitely the toughest of the tough today!
It was one of the stormiest rides I’ve ever done – wind gusts that almost pushed me over, car spray, leaves flying, rain coming in sideways and head-on. It was intense. So much so, that I was laughing out loud at one point when I almost had to walk the bike up and over the broadway bridge because the wind against me was so strong.
It was kind of fun…. kind of.”

That, ladies and gentlemen, is bike commuting at its most challenging, and I salute all the hardy souls who pull it off even on days like that.

It makes me realize that no matter how much we love our bicycles and are committed to riding as much as possible, there is still a place for public transportation and the shelter they provide!

I noticed in the paper yesterday Trimet bus ridership is up 8.8% this September over last. It warms my heart to see people moving to public transportation. There are so many advantages to getting people on the bus. First, full buses help offset the cost of running buses. The more people that ride, the less money Trimet loses, which takes away the argument anti-public transport people make that it just eats up ridiculous sums to haul the homeless around. And Trimet might take a break from the constant fare increases.

Also, the more people that ride the more people will be willing to ride. Have you ever been on a bus with nothing but scary teens and scary crazy people? (I have nothing against the mentally ill, it’s just solving that problem lies outside the scope of my comments). Does that make you want to ride the bus? Probably not. However, as more “normal” people (at least not possibly carrying a weapon or all their belongings in a trashbag) ride, the bus will begin to police itself, the scary teens will be less likely to act scary and you’ll be less likely to be assaulted by someone who hasn’t bathed in weeks arguing with their dead uncle.

My theory is that public transport actually helps the biking movement. Once people make the decision to get out of their cars and ride the bus they realize two things; 1 The bus is not that fast. It stops every couple blocks, takes time to load and unload people and it doesn’t go directly where you’re going. 2 If you’re willing to take the bus instead of the car, why not ride a bike? It’s a lot faster than the bus, makes no stops for passengers, doesn’t cost almost $2, goes when you want and goes straight to where you want. Once you overcome the obstacles of equipment, fear of getting run over, and not knowing how to get where you’re going, it’s the obvious alternative to driving.

Unless it’s raining, in which case it’s just the toughest of the tough out there.