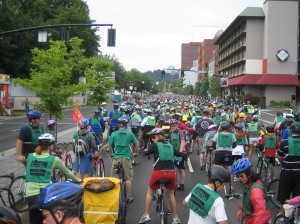 Everyone comes out to ride Portland's bridges once a year.

It has been an interesting year a watershed in fact. Oil prices rising, the housing crisis deepening and widening, eventually overtaking the nation’s and the world’s banking system, talk of the country’s aging infrastructure collapsing. As unfortunate as these developments are for many individuals and families throughout the nation and the world, I can’t help but think how good it will ultimately be for our communities.

For a long time now, as I watch football on tv and therefore commercials for big trucks, I’ve wondered (usually out loud) when the big three are going to wake up and realize they’re betting very heavily on the wrong horse. I knew the era of everyone buying trucks would end sooner or later and to my utter amazement it came to pass over one week in May. As gas prices approached, and quickly broke through the $4 mark, US auto companies changed their tune on a dime, crowing on Monday about the F150 being the world’s most popular vehicle to announcing on Friday they were radically cutting back on truck manufacturing and turning to small cars; of course, this move was going to take them several years and hundreds of millions of dollars. Better late than never, except that it looks like it might actually be too late for them, with GM possibly running out of cash in a year. Time will tell, serves them right. Of course the Japanese were feeding at the same trough, but only enough to get some of the sweet, fat profits. Their real bread and butter is the small energy-efficient cars Ford and GM now have to spend years figuring out how to build.

As a fan of city density, public transportation, walkable cities and bicycles, its hard not to gloat and rejoice, so I give in and do it anyway. On that week in May I made a conscious effort to mark this turning point in history and the myriad of changes it will bring.

Sure enough, news came just in time for summer here in Portland, and our already red hot bike environment got hotter. There are just so many issues and events in Portland, I just can’t name them all here, however that is the point of this column, to bring issues up and maybe have a little to say about them.

Pedalpalooza fired people up with its dozens of bike-oriented events, then the International Car Free conference came to town. It was capped off by the first Sunday Parkways event in North America: a 6 mile neighborhood loop was closed to vehicles, allowing people to ride, walk, skate and skip car-free. It’s modeled after Bogota Columbia where they close several streets to cars once a month. It was a smashing success, the street was jammed with happy crowds of people, from couples and families with kids to older people, all not driving. I could feel the excitement, everyone wanted to know when it was going to happen again. It was at that moment I knew Portland had a chance to really increase its active biking population.

It all depends on getting people to feel comfortable riding around the city amongst the cars and trucks. Portland has made great strides in that direction and I am thrilled to be able to be here to help it move forward in the future.